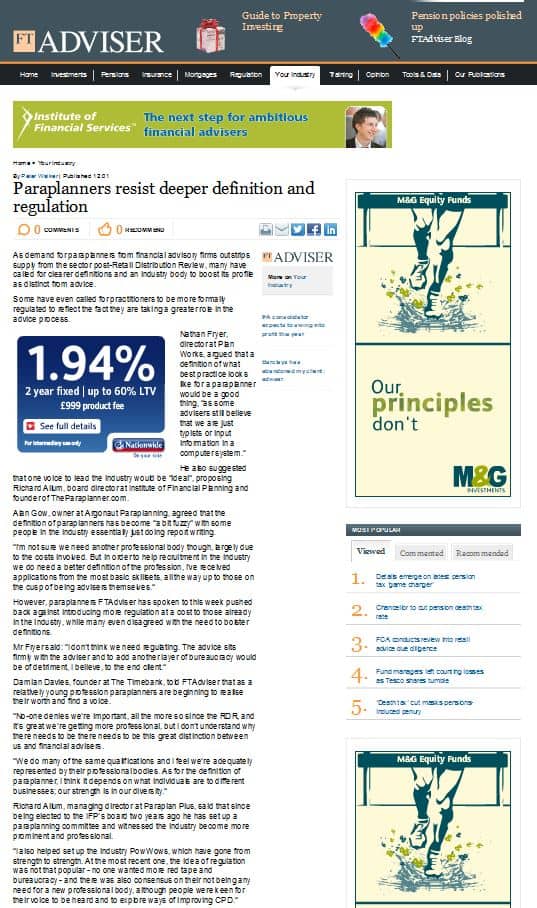 As demand for paraplanners from financial advisory firms outstrips supply from the sector post-Retail Distribution Review, many have called for clearer definitions and an industry body to boost its profile as distinct from advice.

Some have even called for practitioners to be more formally regulated to reflect the fact they are taking a greater role in the advice process.

Nathan Fryer, director at Plan Works, argued that a definition of what best practice looks like for a paraplanner would be a good thing, “as some advisers still believe that we are just typists or input information in a computer system.”

He also suggested that one voice to lead the industry would be “ideal”, proposing Richard Allum, board director at Institute of Financial Planning and founder of TheParaplanner.com.

Alan Gow, owner at Argonaut Paraplanning, agreed that the definition of paraplanners has become “a bit fuzzy” with some people in the industry essentially just doing report writing.

“I’m not sure we need another professional body though, largely due to the costs involved. But in order to help recruitment in the industry we do need a better definition of the profession, I’ve received applications from the most basic skillsets, all the way up to those on the cusp of being advisers themselves.”

However, paraplanners FTAdviser has spoken to this week pushed back against introducing more regulation at a cost to those already in the industry, while many even disagreed with the need to bolster definitions.

Mr Fryer said: “I don’t think we need regulating. The advice sits firmly with the adviser and to add another layer of bureaucracy would be of detriment, I believe, to the end client.”

Damian Davies, founder at The Timebank, told FTAdviser that as a relatively young profession paraplanners are beginning to realise their worth and find a voice.

“We do many of the same qualifications and I feel we’re adequately represented by their professional bodies. As for the definition of paraplanner, I think it depends on what individuals are to different businesses; our strength is in our diversity.”

Richard Allum, managing director at Paraplan Plus, said that since being elected to the IFP’s board two years ago he has set up a paraplanning committee and witnessed the industry become more prominent and professional.

“I also helped set up the industry PowWows, which have gone from strength to strength. At the most recent one, the idea of regulation was not that popular – no one wanted more red tape and bureaucracy – and there was also consensus on their not being any need for a new professional body, although people were keen for their voice to be heard and to explore ways of improving CPD.”

Cathi Harrison, director at Para-Sols and board member at the Personal Finance Society, explained that there has been a lot of work on developing the definition of a paraplanner and it already has its own National Occupational Standards and industry definitions.

She said: “To some extent, I think it’s like trying to specifically define a financial planner; there are so many ways of being a planner and you could apply a slightly different definition to each one out there, albeit with common underlying tasks and goals.

“We already have a good framework, including qualifications and standards, and so I guess my personal opinion is that I don’t feel that we need to be any more prescriptive.

“Along the same thread, I don’t personally feel that a separate industry body is necessary; the main financial services industry bodies are extremely supportive and encouraging of paraplanners and I don’t think we’re in any way held back.

“We have our own events, qualifications, awards, magazines etc. I can’t see a separate industry body being able to add a great deal of additional value.”

Ian Mason, owner of Liberate Paraplanning, also came out against the formation of a paraplanners industry body, pointing out that it would inevitably bring increased regulation and the costs.

“We already have specific exams if we want to take that route and a number of individuals within the industry have gone to great lengths to raise the profile of paraplanning as a profession. The recent PowWow saw many of us get together and share ideas.

“This is the best way forward and everybody felt they were well represented.”

Investment Volatility and the Benefits of Diversification

It is important to understand that investing money in stocks, shares and bonds can mean that the

We created this CPD log for a client and thought rather than charging them to build it,

Further to my youtube video about making Zoom more secure, I have made the attached document which

Read More »
Request a callback to learn more about how our experienced team of paraplanners can help you.
Request a Callback
Twitter Linkedin Facebook
We see our role as your partner; your trusty sidekick, supporting you with high quality, outsourced, award winning paraplanning services.

Home
About Us
What We Offer
Our Process
Contact Us

© 2020 Plan Works Ltd. All Rights Reserved. Plan Works is not regulated by the Financial Conduct Authority (FCA).
website by e-innovate